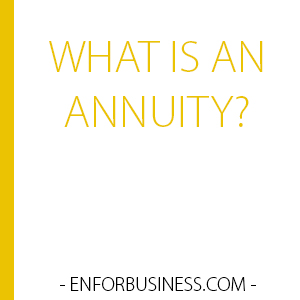 An annuity is a set of payments made or received within a fixed time period, in equal and regular intervals. This means, a fixed amount of money is issued or delivered by or to someone for a pre-established period of time with a regular frequency.

What Does Annuity Mean?

In the business world, the term annuity is mostly used to describe a financial product used for retirement purposes. These annuities are offered by financial companies as a way to save for this particular stage of life. The holder of the annuity pays a fixed initial amount or some installments to the financial company and the policy establishes that after a given number of years, or after the holder turns a pre-defined age, the insurance company will start paying the person a fixed amount of money each month or each year. Most of these products have a death clause that entitles the holder’s beneficiaries to the current value of the annuity.

Let’s take a look at the following example.

Mr. Hendricks is an office manager that works for a fast-food company. He’s currently 40 years old and he wants to start saving for retirement. After consulting his financial advisor he decided to buy an annuity from Sure Life LLC, which is an insurance company. The company is offering him a whole-life annuity that includes a death clause and whole-life annuity payments after he reaches the retirement age. To sign the contract he needs to pay $20,000 as a first installment and then he will start paying $700 a month until he reaches his retirement age. Is this product an annuity as we previously described it?

According to our concept, an annuity is a set of payments made or received within a fixed time period, in equal and regular intervals. As the contract states, Mr. Hendricks will be entitled to whole-life annuity payments. This means he will get a fixed and periodical amount of money after he reaches his retirement age. This means the contract he is being offered is indeed an annuity contract.