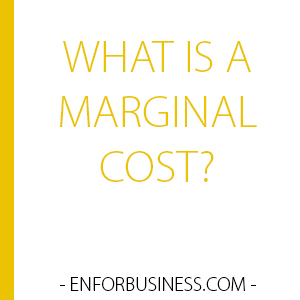 Definition: Increase in the total production cost experienced when an additional unit is produced. Simply stated, is the cost of producing an additional piece.

What Does Marginal Cost Mean?

The concept of marginal cost comes from the field of economics, specifically from microeconomics. Marginal costs are important to determine possible economies of scale. Businesses often analyze the increase or decrease in the cost per unit if new units are produced. When the marginal cost starts to decrease it is said that the company achieved an economy of scale. What this means is that by reaching a higher scale of production the company can save costs.

This concept is regularly employed by manufacturing companies that produce tangible goods but it is also applicable to any product or service that can be measured in units somehow.

Safety First LLC is a company that manufactures safety boots. The company is currently experiencing a sales boost because of the new job safety legislation that the government is implementing. The company has two standard models; one for men and the other one for women.

This means that any of these production levels will provide an economy of scale for the company; therefore, it would be positive to increase the number of units produced to take advantage of this market opportunity.